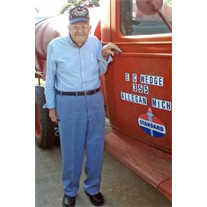 Doran Elmer Wedge (92) passed away at home on Sunday, September 29, 2019. He was born in Allegan, Michigan on August 17, 1927, to Elmer and Audrey (Benedict) Wedge. He graduated from Allegan High School and worked with his father in the family business until enlisting in the U.S. Army, serving in Japan during WWII and was called back to service during the Korean Conflict. On August 6, 1949, he married Alma June Michell and they shared 64 years together. She preceded him in death in 2014. Doran was active in the Jaycees and spearheaded the creation of the Jaycee Park in Allegan with the help of Dave Waanders and Gene Overmeyer. He was also active in the Lions Club and the Masons, volunteering countless hours for service projects and fundraising. Doran took over Wedge Oil and Gas from his father, providing jobs for dozens of individuals over the more than 50 years it was in business. Doran was known throughout the community for his kindness and generosity. He was called on many a cold winter night to help restart the furnace of a family or elderly member of the community, or to deliver oil to someone who had run out. Nobody was ever refused help, even if he knew they probably wouldn't have the money to pay right away, sometimes if ever. He enjoyed worshiping with his church family, At the Masters Feet in Otsego. Doran is survived by his three children and their spouses, Vickie (Ted) Heckman, Eddie (Vicki) Wedge and Dorene (Randy) Farmer; nine grandchildren, Tod (Colleen), Aimee (Jason) and Kit (Melissa), Jesse (Mindi), Andy, Audrey(Jason), Janelle, Ashley (Juan),and Arlen; and 14 great-grandchildren. He is also survived by two of his brothers, Melbert "Pudge" Wedge and Jack (Margaret Ann) Wedge. He was preceded in death by his brother Karlton "Kart" Wedge. Per his request, cremation has taken place and a Celebration of Life will be on Sunday, November 10th at the Allegan Township Hall from 2:00 pm to 4:00 pm. In lieu of flowers, memorial contributions may be made to the Generations Program at Allegan County Medical Care Community, 3265 122nd Av., Allegan, MI 49010 or to his church fellowship, At the Masters Feet, 814 21st Street, Otsego, MI 49078.
To order memorial trees or send flowers to the family in memory of Doran Elmer Wedge, please visit our flower store.
Send a Sympathy Card