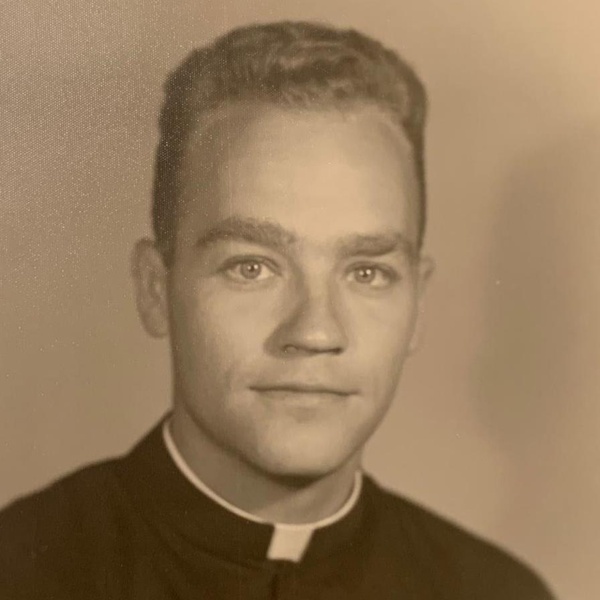 George John Haaf was born on July 20, 1927 in Meriden, Connecticut, to parents Adam and Elizabeth (Gorman) Haaf. He is the eldest of five children. His family moved to Long Island, New York where he grew up, while continuing to spend summers on his Grandfather’s farm in Connecticut. After graduating from Andrew Jackson high school in New York, he went on to serve in the United States Navy, stationed in Texas during WWII. He found his first calling in life in the Priesthood, and attended Maryknoll Seminaries in New Jersey, Massachusetts and New York, as well as Mt. St. Mary’s Seminary in Maryland. He became Reverend George Haaf and gave his first solemn Mass at Our Lady of the assumption church in Copiague, New York in 1957. He was a priest in his parish in St. Paul’s cathedral in Birmingham, Alabama where he served and devoted himself to the civil rights movement in the 1960’s. He marched on Washington with Dr. Martin Luther King Jr. during this time and by the 1970’s, during the Vietnam war, he advocated for peace and for veterans’ rights. He moved on to Michigan, where he earned a Bachelor’s degree in Theology (minor in philosophy) and an M.A. in Social work. He found his second calling in life by the late 1970’s and early 1980’s as a devoted husband, father and all-around family man. He married his wife of 41 years, Shirley Haaf, on October 6th, 1979, and by extension, inherited an entire family. They affectionately referred to one another as “My better Haaf” and together, went on to adopt his two daughters Audrey and Angela, and was henceforth known by all as “Papa”. He had a career as a social worker, counseling veterans’ and prisoners of war at the VA hospital in Battle Creek, Michigan, from where he would ultimately retire. In his retirement, he volunteered for Hospice of Southwest Michigan and gave charitable donations to St. Jude’s Children’s hospital, among other organizations and frequented his “Breakfast club” with friends. He enjoyed the outdoors, was a marathon runner, loved parties and holidays of all kinds and being in nature. He was a world traveler, an animal lover, enjoyed history, theater, football, books, old Cadillacs, spending time with his kids, woodworking, genealogy and photography. He was deeply philosophical and enjoyed connecting with friends on the matters of life and purpose. He was a renaissance man, but above all else, he wholeheartedly loved his family. He was a gentleman that never missed an anniversary, or an opportunity to celebrate even the small things in life. He was known for his kindness, enthusiasm and energy as a Dad, love for his family, friendliness as a neighbor, charitable endeavors, acceptance of others, his gentle spirit, faithfulness to friends and devotion as a husband, father and grandfather. He was a proud Papa. His hearty laugh was infectious, his stories and arsenal of jokes were in constant supply and his nature as a man was endlessly thoughtful and caring. His entire life was about meaningful connections and service to others. A man of deep faith, he departed peacefully with God on January 5th, 2021, at the conclusion of a beautiful life that was well lived. “His Lord said unto him, Well done thou good and faithful servant; Thou hast been faithful over a few things, I will make thee ruler over many things; Enter thou into the joy of thy Lord.” Matthew 25:21 He is preceded in death by parents Adam and Elizabeth Haaf, and siblings Margaret Bassler, Robert Haaf and Peter Haaf. He is survived by his wife Shirley Haaf, daughters Audrey Haaf and Angela Haaf, step-children (Saviano); Elizabeth, Celeste, Cynthia, Patricia, Andrea, Susan, Joseph (Jennifer) and Melissa (Snell). Sister Caroline Fisher, brother in-law Lewis Fisher, Nieces and nephews Audrey Witham, Steve Fisher, George Bassler, Anne Bassler, great nephews and niece; Mike, Josh, Austin and Margaret, Grandchildren; Lauren, Katie, David, Daniel, Anthony, Alexandra, Samantha, Elizabeth, Joseph III, Jessica, Desmond and Joseph. And great-grandchildren; Damien, Tavion, Tyra, Mackenzie, Shaun, Branden, Mateo, Neiko, Zuri, Edith and Isabella. He touched so many lives and will be greatly missed by all. *Due to Covid-19 restrictions, services are limited to 25 family members. Funeral services for George Haaf are as follows: Visitation and service Avink Funeral home and Cremation Society 5975 Lovers Lane, Portage, MI. 49002 Tuesday, January 12th, 11:30 a.m. Graveside Service Fort Custer National Cemetery 15501 Dickman Rd., Augusta, MI. 49012 Tuesday, January 12th, 1 p.m. *Additional info: Covid-19 precautions apply. Service at Avink and Fort Custer National Cemetery, are limited to 25 attendees of George’s family. Face masks are required as well as 6 ft of distance between persons. Timeliness is imperative as late attendees, unfortunately, cannot be accommodated. Attendees will need to rideshare with whomever they arrive with, and should not change or take on additional passengers in cars. For all George’s beloved friends (and other family who are unable to attend), an upload of George’s service will be available to view on this website on Tuesday, January 12th. Please direct those who would like to watch, to this site. Please share your thoughts, stories and photos on his tribute page, as we bid him farewell with love and light. In lieu of flowers, please make donations to Rose Arbor Hospice in George's name. The family is being assisted by Avink Funeral Home & Cremation Society, 5975 Lovers Ln., Portage, MI 49002. (269)344-5600.
To order memorial trees or send flowers to the family in memory of George Haaf, please visit our flower store.
Send a Sympathy Card