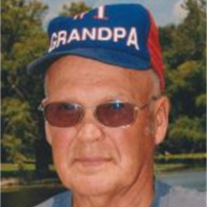 Ivan (Dick) Richard Skinner, 88, of Battle Creek, MI passed away peacefully Tuesday, October 15, 2019 at his home surrounded by his family. Dick was born on July 17, 1931 in Muskegon, MI. the son of Clifford & Bertha (VanAllen) Skinner. Dick retired from Kellogg's and he always said, "28 years and I never made a flake." He served in the US Army from 1949 to 1952 and was stationed in Japan. He enjoyed hunting, fishing & golf. Surviving are his wife, Margaret (Greenman/Moody) Skinner, daughters Ginger (Larry) Mielke of Portage, MI and Dixie Jo Vicars of Galveston, TX, step-daughter Claire Fingas, sister Phyllis (Ron) Gruesbeck, many grandchildren, step-grandchildren, great-grandchildren, step great-grandchildren and several nieces and nephews. Dick was proceeded in death by his parents and first wife, Joanne (Sanford) Skinner. He was under Hospice Care of Southwest Michigan, a wonderful organization. Memorial contributions to Hospice Care of Southwest Michigan or the Haven of Rest in Battle Creek, MI will be appreciated. A graveside service will be held on October 27th (Sunday) at 11:30am at Springfield Reese Cemetery, Larry Mielke (Son-in-law) officiating, with a Noon luncheon to celebrate his life following at The American Legion Post #298, 228 N. 20th Street, Battle Creek, MI.
To order memorial trees or send flowers to the family in memory of Ivan Richard Skinner, please visit our flower store.
Send a Sympathy Card