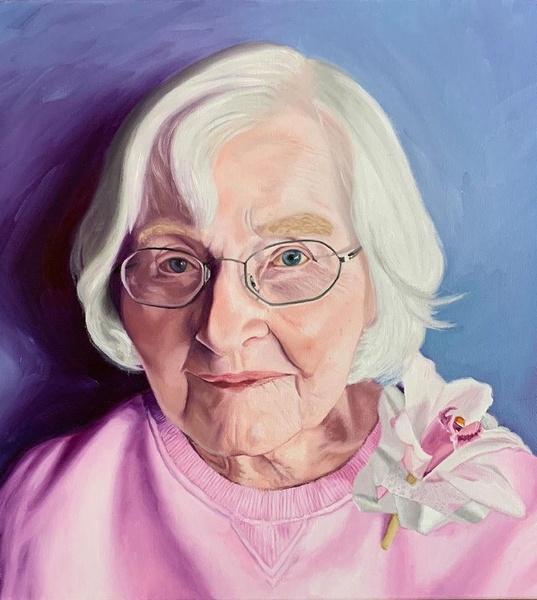 Departed February 7, 2022. She was born in Kalamazoo, February 10, 1923, daughter of Charles W. and Retah (Johnson) Bennett. Adrienne graduated from Kalamazoo Central High School in 1941, attended WMU and worked briefly at Be-Mo Potato Chips. She was united in marriage to Clarence David Ikerd, September 14, 1945, who preceded her in death, January 19, 1992.

She was employed 19+ years at First of America Bank in the Trust Department. After retirement she became interested in Russian culture and the language and took several classes at WMU. She traveled to Russia to our sister city Pushkin, St Petersburg, and took a suitcase full of clothes to the children in an orphanage and took time to speak with them in Russian. She was also interested in alternative healing and was an avid reader on that and many other subjects. She mentored elementary students in reading at Kalamazoo Public Schools. Adrienne traveled extensively to Europe visiting her grandsons who were stationed in England and Italy. She went to Octoberfest in Austria, and to France to celebrate the 60th anniversary of Normandy with members of the 5th Division Army. She also traveled throughout the United States and Hawaii. She stayed at the famous Hotel Chelsea in New York City while attending a play to see her granddaughter perform. Among her many travels she went to Mackinac Island and stayed at the Grand Hotel with her sister, went white-water rafting out west with her sister’s family and enjoyed every minute of her travels.

When her children were young, she was a stay-at-home mom. Adrienne was a Brownie and Girl Scout troop leader from 1957-62. She was an advocate for the less fortunate and always a conscientious citizen, writing letters to the editor and protesting actively when she saw a cause worthy of pursuit. She always saw the good in people and every day was a good day. She was instrumental in the foundation of Unity Church of Kalamazoo, a charter member, served on the board of directors, and was an original member of the Prayer Group at Unity. Her many memberships included Ladies Library Association, life memberships in O. E. S. Loyalty Chapter #497, later Corinthian Chapter #123, D.A.V. Auxiliary Buck Crosby Chapter #6. She was also a member of ARE, the Society of the 5th Division (associate), Shriner’s Wives, and Daughters of the Nile.

The family wishes to express our deepest gratitude to caregivers at Heritage Community and Hospice of Southwest Michigan. The nurses, staff and aides were always there for her with compassion and joyous fun.

A celebration of Adrienne’s life will take place at Unity of Kalamazoo Church, 1204 Whites Road, Kalamazoo, MI 49008 on May 21, 2022 at 11am with visitation at 10am. Adrienne will be laid to rest at Mount Ever Rest Memorial Park of Kalamazoo, MI.

Memorials may be directed to Unity of Kalamazoo, Shriners Foundation for Crippled Children, or a charity of your choice.

While at www.amsfuneralhomes.com please take time to sign Adriennes’ guestbook and/or share a memory with her family.

To order memorial trees or send flowers to the family in memory of Adrienne Lorene Ikerd, please visit our flower store.
Send a Sympathy Card