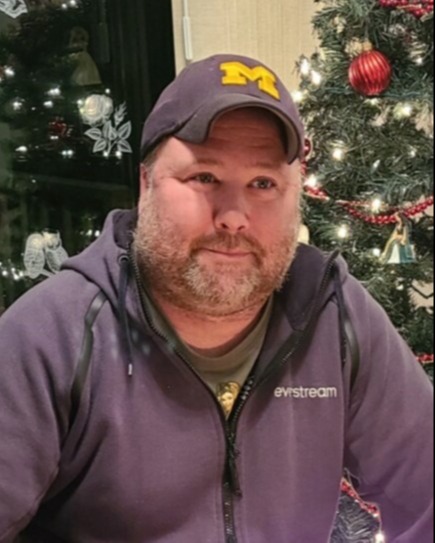 He attended Vicksburg High School following graduation he attended Baker College where he received his Bachelor’s degree while raising a family. From a young age Andy showed an aptitude for computers, working in IT he made a name for himself working hard climbing the corporate ladder until becoming the Senior Manager Global Help Desk where he oversaw multiple groups and countries. Through work he was able to travel to many countries and made many friends around the world, which he was very proud of.

In 2003, Andy was united in marriage to Brandi Nieuwenhuis, together they had two children: Addison and Dylan. Andy adored his children and enjoyed watching sports and dance recitals. Though Andy and Brandi later separated they were proud of how they coparented and blended their families.

In his free time Andy enjoyed watching sports with his son: Dylan, taking his daughter: Addison to country concerts, going on camping trips with his twin brother: Randy, where they went fishing and metal detecting, and stock car races. Andy always made a point to take a family vacation, every year. His favorite destinations were Northern Michigan where he spent time with his father and step-mother: Teri. Going to South Dakota was one of his family’s favorite trips in recent memory. He loved getting together for family game night with his mother and step-father: Ray. Andy’s father: Robert instilled a passion for family history and coin collecting.

He will be fondly remembered for the love he expressed to his family, always being available to help, and being an icon and leader for those who knew him. Randy will always cherish having Andy by his side through all of the ups and downs life brought.

Andy is preceded in his passing by his father: Robert Munn.

In accordance with the family’s wishes funeral services will be held at Avink, McCowen & Secord Funeral Home, 409 South Main Street, Vicksburg, MI 49097, with time of visiting on Wednesday, December 28, 2022, from 4:00 PM - 7:00 PM. A celebration of Andy’s life will be held on Thursday, December 29, 2022, beginning at 11:00 AM officiated by Lucas King. Andy will be laid to rest with his father at Vicksburg Cemetery following the service.

Memorials made in Andy’s memory may be directed to the Great Lakes Center for Autism Treatment and Research. Envelopes are available at the funeral home.

While at www.amsfuneralhomes.com please take time to sign Andy’s guestbook and/or share a memory with his family.

To order memorial trees or send flowers to the family in memory of Andrew Robert Munn, please visit our flower store.