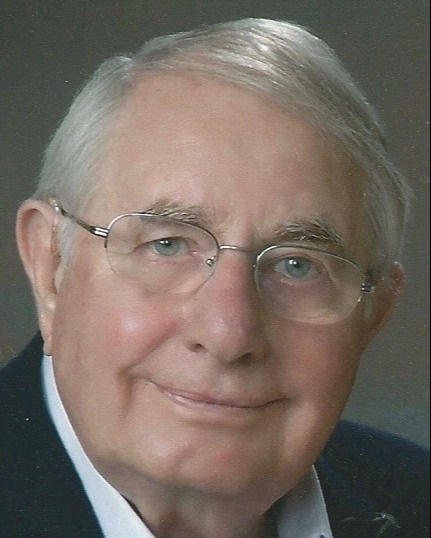 Clyde Springer, 94, longtime Schoolcraft resident, corporate executive, entrepreneur and patriot died September 8 after an extended battle with cancer.  Born August 25, 1928 in Lansing, he was the son of H. Gail and Jessie (Hicks) Springer.

Clyde and Lois, his wife of 68 years, raised their children in Schoolcraft in the 1960’s and were active in church, social, and civic activities.  Clyde and Lois repeatedly stated many of their happiest years were here.  Clyde and his family were long-time members of Schoolcraft Presbyterian Church, where he held leadership positions for many years. He also served a term as President of the Lions Club.  The family moved away in 1968, and after 30 years Clyde and Lois came back to the community they loved so much.

Clyde worked in the agriculture and wholesale food industries, rising to Vice President of Michigan Farm Bureau.  While with Farm Bureau, he was also a senior leader of the American Egg Board, and was part of a delegation that presented eggs to First Lady Rosalyn Carter for the annual White House Easter-Egg Roll.  After he retired from Farm Bureau he start two new businesses in Western Michigan.  First was Country Queen Foods, maker of pre-cooked eggs for the wholesale user (remember diced eggs on Wendy’s salad bar?).  After selling that firm, he started Festida Foods, maker of tortilla chips.  He retired in 1993.  In retirement Clyde and Lois traveled extensively, with several trips to Europe, Caribbean, and across the United States.

He enlisted in the Michigan Army National Guard as a private in 1946, and retired as a Major after 22 years of service.  From 1964-1966 he was the Commander of B Company, 246th Tank Battalion in Three Rivers, and received the Draper Award, bestowed on the best tank company in the state.

Clyde was a member of the National Society of the Sons of the American Revolution, and the General Society of Mayflower Descendants.  He was a descendant of Mary Chilton, who legend has it, was the first Mayflower passenger to step onto Plymouth Rock.  He was also a member of the Portage Chapter of the Eagles, where he served as treasurer for several years.

Visitation will be held at the Schoolcraft Presbyterian Church from 4-7pm on Wednesday, September 14, and from 10 to 11am on Thursday.  Church service will be at 11am, with military honors at the graveside service at noon.  Luncheon will be served at Westminster Hall, located behind the church, following the graveside service.

In lieu of flowers, contributions can be made to the Schoolcraft Presbyterian Church, Tunnels to Towers, or Centrica Care Navigators.

While visiting Clyde’s webpage at www.amsfuneralhomes.com please sign the guestbook by lighting a candle, and/or sharing a memory with the family.

To order memorial trees or send flowers to the family in memory of Clyde Irwin Springer, please visit our flower store.
Send a Sympathy Card