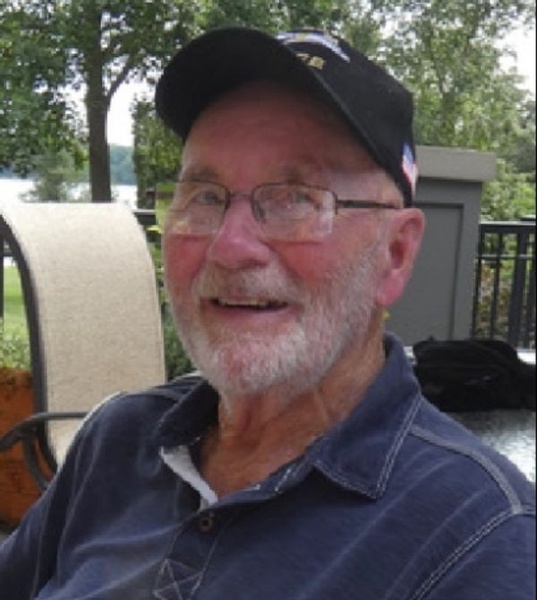 After a years-long battle against Parkinson's Disease, Dean Duane Gould of Grand Rapids, MI passed away peacefully Friday at the age of 90. Dean was born in Flint, Michigan in 1931 to Mildred and Dan Gould. He married Joanne Hess in 1953 before joining the Air Force, becoming a pilot, and flying fighter jets in the Korean War. After returning from active duty, he continued to fly for the Air National Guard while finishing his business degree at Michigan State University, and for many years afterward. Dean enjoyed a long and very successful career in business, holding executive leadership roles in the plastics and paper manufacturing industry, owning and running his own company, managing teams and plants around the world, and developing a lifelong love of travel. In 2003, Dean's wife Joanne passed away from ALS. Several years later, he met Barbara Willis while both were serving as board members for the ALS Association, and they married in 2007. Dean was preceded in death by his wife Joanne (Hess) Gould in 2002, and is survived by wife Barbara (Willis) Gould; children Sharon London (Tom), Sue Kirk (Terry Garbacik), David Gould (Christy Rain), and Doug Gould (Jim Reading); grandchildren Brenna, Joey, Hayley, Justin, Jarrod; and two great grandchildren; as well as step-children and grandchildren by marriage. Dean is also survived by sister Janetha Gulick and brother Ed Gould. A private burial service for immediate family will be held on December 30 in Vicksburg, and a celebration of Dean's life will be held in the spring. In lieu of flowers, the family requests that donations be made to the ALS Association (https://donate.als.org) or the Parkinson's Foundation (https://www.parkinson.org). Dean will be forever remembered by his loving family as an active, kind, humorous, generous, extraordinarily intelligent and multi-talented husband, father, and grandfather. He loved outdoor sports, travel, reading, and particularly the time spent with family.

To order memorial trees or send flowers to the family in memory of Dean Duane Gould, please visit our flower store.