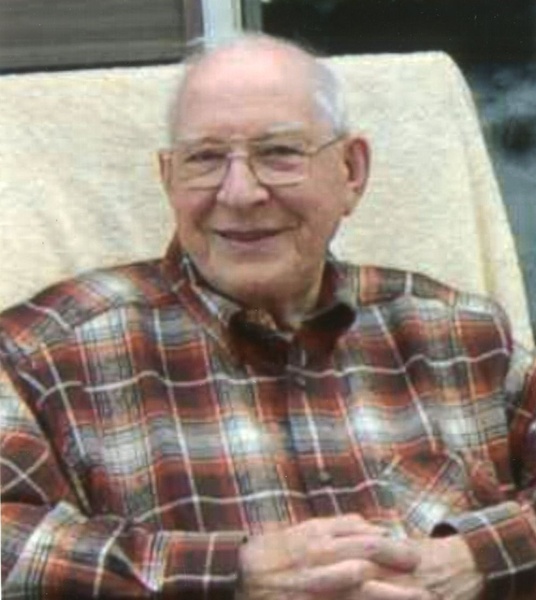 Donald G. Campbell, 88 years old, of Portage, Michigan died July 9, 2022 of heart failure.  Don was born in the Upper Peninsula of Michigan to William and Florence Campbell on July 7, 1934.  He had two brothers,  Bill & Ray and a sister, Norma.  They grew up in Melstrand, a logging community.    The family owned a logging operation that provided logs for P.T. boats, gliders and ammunition boxes.  The family also ran the general store in Melstrand for more than 50 years and everyone in the family had job.
Don attended school in a one-room schoolhouse in Van Meer and then Sacred Heart school in Munising.  He attended  Mather High School, where he met his future wife Carolyn Howlett and graduated together with the class in 1952.  Don & Carolyn were married December 26, 1953.  They raised a loving family of three children.  They enjoyed traveling and spending summers at their cottage on Ready Lake.
He was an instructor in the Air Force teaching math and weapons.  After discharge, he went on to gain his Bachelors degree at Northern Michigan University and his Masters at Michigan State.  He taught Chemistry, Physics and Electricity at Pennfield in Battle Creek and Portage Central High School, retiring in 1994.  While he was teaching, he also found time to acquire 30 National Science Foundation hours.  His alma maters included Franklin & Marshall, Montana State, Arizona State, San Diego State, Michigan State and the Institute of Optics in Rochester, New York.  Don went on after retiring to promote physics education on a national level at the Center for Science Education at Western Michigan University, working with Dr. Robert Poel and Dale Freeland.  With their project, Operation Physics, they developed lab based workshops to enable teachers to be more effective in teaching science and developed a text book based on lab experiences.
Don was a member of Westminster Presbyterian Church in Portage, Michigan and he was an active American Legion member where he worked on competitions for academic scholarships.
Don is survived by his wife of over 68 years, Carolyn; his children Carolyn Beth and Dan Neff, Amie Campbell & John Hanson, Craig & Lydia Campbell; his grandchildren; David and Kailan Neff, Matthew Campbell, Katherine & Geoff Gibson, Brian Campbell; his great grandchildren; Peyton Gibson, Logan Gibson, Ray Neff and Ellie Neff.  He enjoyed being Uncle Don to his many nieces and nephews.
A memorial service will be held at Westminster Presbyterian Church in Portage on August 13th at 2:00 PM and a burial service will be held in Munising on September 3rd.
To order memorial trees or send flowers to the family in memory of Donald G. Campbell, please visit our flower store.