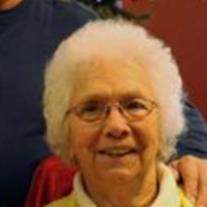 Elsie L. (Wolthuis-Desness ) Carvell, 92, passed away peacefully on June 1, 2021 at Rose Arbor Hospice with her family at her side. Elsie was born February 24, 1929 in Vicksburg, MI., the daughter of John R. and Myrtle (Hendricks) Wolthuis. Elsie grew up in Vicksburg on their family farm on “Dutchman’s Road” with her siblings MaryAnn, John, Betty, Louis and Bill. Their days began early before school working in the celery muck and tending to the bedding plants in the greenhouses. Even though it was hard work, she seemed to always remember those days as good memories. Elsie graduated from Vicksburg High School in 1947 and married her high school sweetheart Willis R. “Bill” Carvell on June 28, 1947. They had three sons, Michael, David and Richard and again settled on “Dutchman’s Road” just down the road from the old family farm. Their family shared many fun times growing up in the country, fishing in the creek, walking in the woods, helping in the garden and roaming down to grandpa and grandma’s farm. Bill also taught his boys how to hunt and shoot. Tragically, Bill was diagnosed with Leukemia and passed away in October 1956. Elsie went to work for Lockshore Farms Dairy in Kalamazoo as a clerk/bookkeeper, always making sure her boys were provided for. Elsie was introduced to William A. “Bill” Desness, her sister Betty’s brother-in-law, and they were married on June 7, 1961 in Plainwell, MI. Elsie was an excellent cook and homemaker. Canning and freezing the produce from their large garden, sewing, and still finding time to work on the many crafts she enjoyed kept her busy, but taking care of her three boys was her biggest job. Bill and Elsie were both eventually employed by The Upjohn Company, and when the boys grew up and left home, Bill and Elsie moved to Kimble Lake and thoroughly enjoyed their empty nest. The neighborhood Sunday breakfasts on the lake with their neighbors were certainly fun times, as were their weekends “clubbing” with their friends. They had a great trip to Germany to visit with Michael who was stationed there in the military, and then spent three weeks traveling Europe. They eventually moved to their home “up in the woods” on W Ave. Their nest began to fill again, but this time with grandchildren, and they both cherished time spent with all of them. They enjoyed summers in their RV at Willow Lake Campground, but retirement beckoned and in the fall of 1989 they both retired from The Upjohn Company. After a brief sojourn in Barbeau, Michigan in the UP, they became official snowbirds, living at Klein’s Resort in Three Rivers in the summer and Stuart, Florida in the winter. While in Florida, Elsie teamed with her sister MaryAnn and spent countless hours sewing many gorgeous costumes for a local Ice Capades. Again, tragically, Bill was diagnosed with lung cancer and passed away in August of 1993. Elsie continued snow birding for a number of years, but then settled in a small country home near Lawton, where she continued sewing, knitting, gardening and taking care of her beautiful flower gardens. Eventually, dementia began to take its toll, and Elsie moved to Amber Place for the final chapter in her life. Elsie is survived by her sons David (Karen) Carvell of Portage and Richard Carvell of Kalamazoo; daughter-in-law Catherine Carvell of Goodlettsville TN; six grandchildren and several great-grandchildren; her siblings John Wolthuis, Betty Wheeler and Bill Wolthuis. She was preceded in death by her parents, her husbands, her son Michael and siblings MaryAnn Klimek and Louis Wolthuis. In accordance with the family's wishes cremation has taken place and a public visitation will be held on Thursday, June 10, 2021, from 3:00 p.m. until 7:00 p.m. at McCowen & Secord Family Funeral Homes Rupert-Durham Chapel, 409 S. Main Street, Vicksburg, MI 49097. 269-649-1697. A graveside service will be held on Friday, June 11, 2021, at 10:00 a.m. at Vicksburg Cemetery with Pastor David Thompson officiating. In lieu of flowers memorials made in Elsie's memory may be directed to Rose Arbor Hospice or the charity of one’s choice. Envelopes will be available at the funeral home. While visiting Elsie's tribute page please take a moment to light a candle or share a memory with the family. The Carvell family is being assisted by McCowen & Secord Family Funeral Homes Rupert-Durham Chapel, 409 S. Main Street, Vicksburg, MI 49002. 269-649-1697.
To order memorial trees or send flowers to the family in memory of Elsie Lucille Carvell, please visit our flower store.