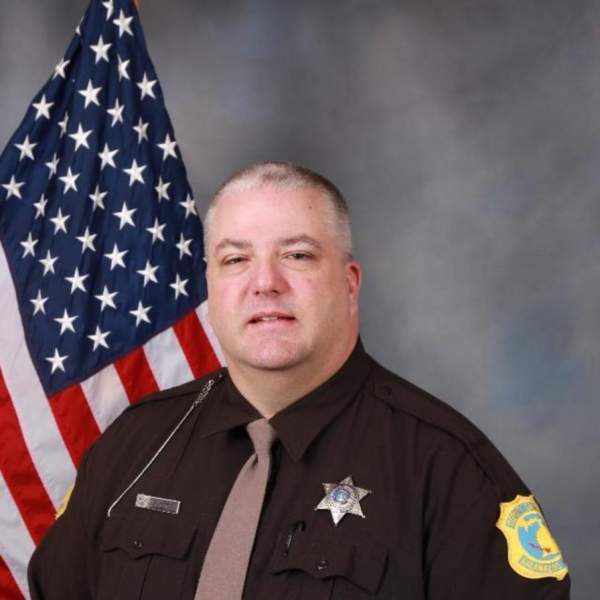 Deputy Sheriff Eric W. West, of Schoolcraft passed away on Monday, October 25, 2021, at the age of 50. Eric was born on February 3, 1971, in Kalamazoo, MI. He was the son of Richard and Delores (Merchant) West. Eric graduated from Schoolcraft High School with the Class of 1989. He was a member of the Schoolcraft Eagles State Championship Football Team. Eric served the communities he served with a servant’s heart. He worked for the Village of Vicksburg Police Department for 20 years and was during that time the Chief of Police for the village. In 2017 he joined the Kalamazoo County Sheriff’s Department as a Road Deputy and also was a Field Training Officer (FTO). Eric also retired from the South Kalamazoo County Fire Authority and had his EMT license. In Eric’s spare time, he enjoyed coaching the Schoolcraft Eagles Bowling Team. He bowled his entire life and enjoyed having a 300 game once in his life. He was also a huge fan and season ticketholder of the Kalamazoo Wings. Eric is survived by his wife of 26 years, Shawna; two daughters: Ally West, of Three Rivers; Megan West, of Bellevue; five siblings: William (Bobbie) West, of Coldwater; Judy (Ron) Harmon, of Union City; Mick (Jean) West, of Otsego; Stan West, of Schoolcraft; Mark (Sue) West, of Portage; numerous nieces, nephews and great nieces and nephews. He is also survived by his special dog, Rookie. Eric is preceded in death by his parents: Richard and Delores West; and one brother, Richard West Jr. A memorial service will be held on Saturday, October 30, 2021, at 1pm at Radiant Church, 995 Romence Road, Portage, MI. The family will receive guest at the church from 11am until the time of the service. While at www.avinkcremation.com please take time to sign Eric's guestbook and/or share a memory with the family. Those who wish may make contributions to the Kalamazoo County Sheriff’s Department K-9 Unit. The West family is being cared for by the Avink Funeral Home & Cremation Society, 129 South Grand, Schoolcraft, MI 49087 (269)679-5622.
To order memorial trees or send flowers to the family in memory of Eric W. West, please visit our flower store.