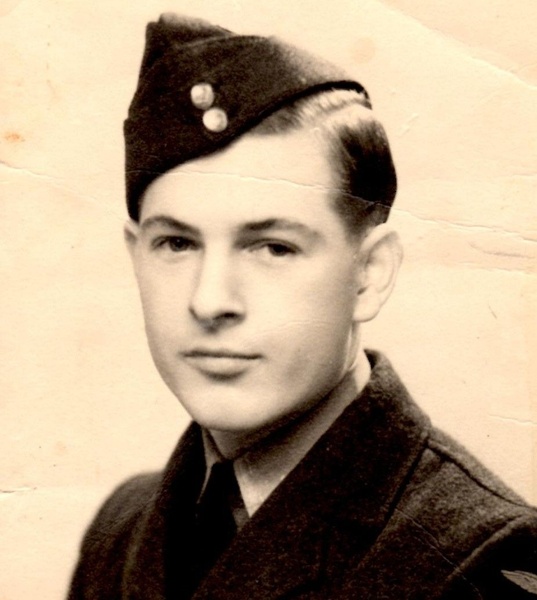 Ernest Emile Dyer passed away on January 4th, 2022 at the proud age of 98 surrounded by his wife of almost 70 years, Helena, his three daughters, Carol, Patricia, and Anne, his son in law, John (Anne) and his grandchildren, Emily and Matthew. Ernest, fondly called Ernie, was resilient in body and mind, known for being the most affectionate man who always greeted you with a big hug and kiss on the cheek. He was a kind man, soft spoken, but had a dry sense of humor that was always perfectly delivered with his never faded beautiful British accent. He was a great man, who quietly showed everyone around him how much he loved them.

Born on September 2, 1923, he survived so many challenges throughout his life. Born to Ernest and Emily Dyer, Ernest and his siblings Gordon (Evelyn) and Sally (Reginald), moved at least 9 times by the time Ernie was 14 years old, as his father was a member of the Royal Air Force (RAF). The family even lived in Egypt for two years.

Ernie served his country in WW2 in both England and Calgary, Alberta, Canada as an air craft mechanic and radar technician, where he learned everything he knew about electronics. After the war was over, Ernie met his wife, Helena at a ballroom dance class in England. The two got married on March 15, 1952. They immigrated to Ontario Canada in November of 1952 on a ship called the Empress of France. Upon arriving, they discovered Helena was pregnant with their eldest daughter, Carol Ann. Three years later followed Patricia Lynn, then 8 years later, Anne Louise. When Anne was only 18 months old, the family immigrated to the United States living in Columbus, Ohio for 4 years. Then they moved permanently to Kalamazoo, MI where Ernest lived out the rest of his life.

Once settled in Kalamazoo, Ernest was employed and highly respected at Plainwell Paper Company as an electronics technician supervisor. Then the family received news that Ernest had a large benign tumor on his brain. While not cancerous, the tumor and its removal caused serious damage to Ernie’s short term memory ability causing it to be difficult for him to work. As a result, his wonderful and strong wife, Helena became the breadwinner for their family going back to school for the first time since 9th grade, getting her GED and eventually a self supporting job at the Upjohn Company. Once the initial long term recovery of the brain tumor was over, Ernie returned to Plainwell Paper in a less taxing position and eventually retired from there in the fall of 1988.

He spent his retirement listening to his life-long love of classical music and operas. His favorite opera was The Barber of Seville and his favorite composers were Verde, Rossini, Schubert and Mozart. Ernie always sang in a choir at their church and gave his lovely bass voice to the local men’s Barbershop Choir, the Mall City Harmonizers. He and Helena brought their children and grandchildren to the Kalamazoo Symphony Orchestra and the Air Zoo. He spent afternoons playing the harmonica, building model trains and competing at checkers with his grandson, Matthew and while he had little use for playing cards, he would grudgingly agree to play and would always win. Ernie loved to read (non-fiction only) and would often be seen reading encyclopedias and calculus textbooks (you know for fun)

Ernie survived many things, WW2, immigration, a life altering brain tumor, stealing the keys to drive his car after cataract surgery, raising three daughters, and every other little complication that life presented. Despite all challenges, Ernie was one of the most healthy people alive, swimming dozens of laps in the Borgess Athletic Center pool until he was 93, and he still had the most beautiful lush head full of hair up until the day he died. His wife, Helena is the main reason for how healthy he was. She happily took care of him for decades. In the last two years of his life, Ernie’s family decided to enter him into Bethesda Ranch Family Home Care. Ernie’s family couldn’t have been happier or more grateful to the care Ernie received there (including the daily visits and snuggles from Treasure, one of the Ranch’s many cats). There are absolutely no words to describe how much Rachel, Theo, their children, and Tasha did for Ernie and his family and we will be eternally grateful. They were the ones who made sure Ernie was surrounded by his family at the time of his death. All of them were just happy to finally see Ernie comfortable and at peace.

While we will miss him every single day, we hope Ernie is happy in his eternal resting place eating the biggest bowl of strawberries with endless model trains, a beautiful swimming pool, Rossini playing in the background, and remembering every detail, long term, short-term, of his beautiful life.

In lieu of flowers, please send donations to Hospice Care of Southwest Michigan in honor of Ernest Dyer.

While visiting Ernest’s webpage at www.amsfuneralhomes.com please sign the guestbook by lighting a candle, and/or sharing a memory with the family.
The family is being assisted by the Avink Funeral Home & Cremation Society, 129 S. Grand St. in Schoolcraft. 269 679-5622

To order memorial trees or send flowers to the family in memory of Ernest Emile Dyer, please visit our flower store.