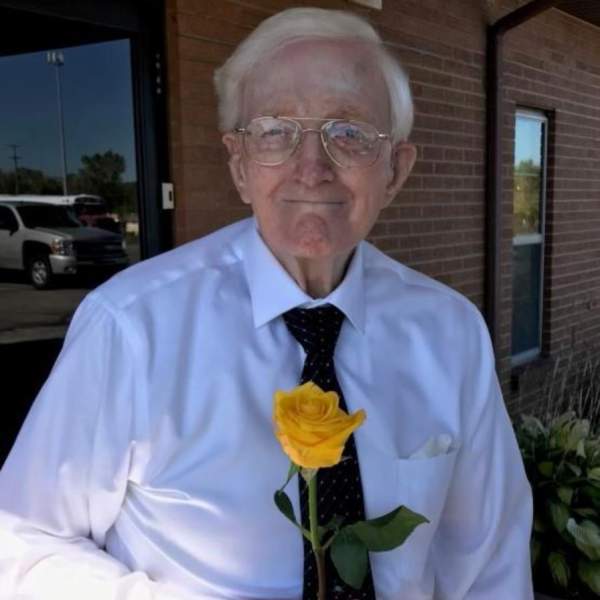 Reverend Gerald D. Laing, of Vicksburg passed away on Monday, July 26, 2021 at the age of 91. Gerald was born on October 18, 1929 in Lansing, MI. He was the youngest of six children, with nicknames such as, “the curly red headed little boy”, “Red”, “Popsicle” later in life by his daughter. He grew up on a small farm. Born nine days before the collapse of Wall Street, which was the beginning of what became known as the Great Depression. Franklin D. Roosevelt was the President of the United States at the time. Gerald dropped out of high school during his sophomore year because his dad was injured and couldn’t work the family farm. His brothers were either in combat or working in war production. He went to work for a neighboring farm six days a week to help support the family. In the late 40’s Gerald met Marcine Green while visiting her church. Over the couple of years that followed, he and Marcine sang special events together. On Memorial Day 1951 they spent their first date calling in Mullikan, MI for a new church start up. A couple of months later in July, Gerald proposed to his sweetheart, and Marcine accepted. Days later Gerald received his draft notice and was sworn into service with the United States Army on July 21, 1951. Although they initially planned to wait until he returned from Korea, Gerald and Marcine decided that would be too long to wait so they married while he was on a weekend pass on November 3, 1951, in the Church of the Nazarene in Augusta, Georgia. The newlyweds remained in Augusta while Gerald completed his basic training, and they returned to Lansing that December for their wedding reception. Less than a month later Gerald was shipped out to Japan for final training in chemical, biological, and radiological warfare, then sent to Korea. He became ill in Korea and had substantial loss of hearing, so was shipped back state side. After being discharged from Walter Reed Army Hospital they shared a small apartment in Alexandria, Virginia and Marcine worked for the Pentagon while he finished his commitment at Ft. Belvoir. Gerald was discharged in 1953. They briefly returned to Lansing before enrolling at Trevecca Nazarene College in Nashville, Tennessee, where he pursued his calling to ministry. Marcine worked at Vanderbilt University for the head of the school of nursing. During this same time, Marcine gave birth to James, and Jacquelyn. From 1954 through 1960 they lived in a travel trailer as Gerald ministered as an evangelist. Before preaching, Gerald played guitar with Marcine on the accordion while they sang together. In 1961 Gerald left the field of evangelism and began pastoring Grace Nazarene Church in Jackson, Michigan. In 1970 they moved to pastor Grand Ledge Church of the Nazarene in Grand Ledge, Michigan. While there Gerald built a cabin at Indian Lake Nazarene Campground in 1974 for the family to enjoy together. In July of 1976, Gerald went back to work as an evangelist, and they traveled until his retirement in 1992. In 1979, Gerald built their home at Indian Lake Nazarene Camp. Throughout most of their retirement years Gerald and Marcine continued to do revivals, supported Indian Lake Nazarene Camp and Chapman Memorial Church. Gerald took great pride in his flowers and yard. Other hobbies were golfing, woodworking, stained glass art, painting, along with preaching and sharing the gospel everywhere he went. Many will remember Gerald for his amazing memory and the ability to recite scripture, poetry, and songs; as well for his beautiful prayers. Special gratitude to his caregiving angels: Barb Palowski, Nancy Glenn, Martha Stanley, and Amber & David Martin, and a big hug to Halen who shared his love for painting. Reverend Gerald Laing was preceded in death by his wife of 60 years, Marcine on June 2, 2012, and his siblings. He is survived by his son and daughter-in-law: Jim (Kemi) Laing; daughter and son-in-law: Jacquelyn (John) Skurkey; five grandchildren: James (Alison) Laing; Jared (Tobi) Laing; and Jodi (Adam) Leonard; Chelsie (Jared) Capello; Cole (Kara) Hostetler; 14 great grandchildren: James Dewaine III “Jase”, Jada, Jalen, Jasmin, Jianna, Jonah, Landri, Lincoln, Madison (Kevin), Adam II, Jozalyn, Amelia, Alessandra, Marisa, and one baby on the way. He is also survived by a niece, Elizabeth Bashore. Gerald has been cremated and a burial with military honors will take place at Vicksburg Cemetery at a later date. While at www.mccowensecord.com, please take time to sign Gerald’s guestbook, view updated service information, and/or share a memory with the family. Those who wish may make contributions to: Heart for Central Africa (HFCA-Harkema) P.O Box 355 Middleville, MI 49333 http://www.buildingbukavu.org/ The Laing family is being cared for by the McCowen & Secord Funeral Home, 409 South Main, Vicksburg, MI 49097 (269) 649-1697.
To order memorial trees or send flowers to the family in memory of Gerald D. Laing, please visit our flower store.