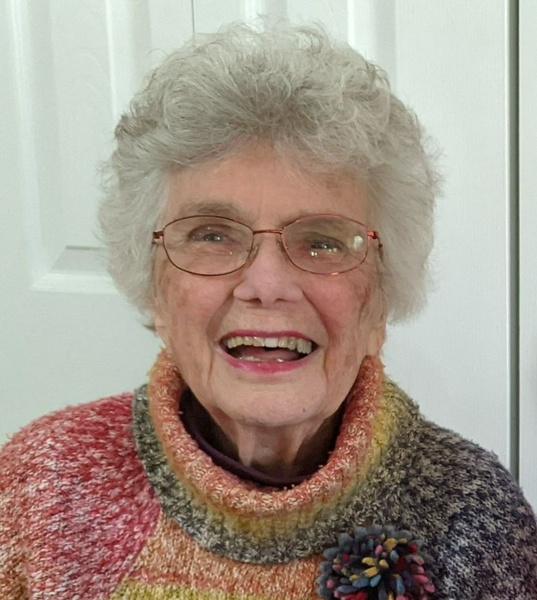 Helen Neff of Portage, MI, passed away on Monday, April 18, 2022, after a short illness at the age of 95. Helen was born on May 28, 1926, to Harold and Mabel Hammond in Caldwell, Kansas. Helen met her husband, Bill, at Kansas State University, and on June 12, 1948, they were married—the beginning of a 73-year marriage. They both went on to graduate school at Purdue University, where Helen was the coach for the debate team, and where she received a Master’s Degree in Speech. They had four children. Helen filled her life with many volunteer activities, including being a leader for Brownies and 4-H. She and Bill hosted as “parents” for four exchange students, 2 from Sweden, 1 from France, and 1 from Japan. Among her other activities, she was very involved in the Kalamazoo Garden Club and was a state flower show judge. She volunteered for Loaves and Fishes for many years. She served in her church as a deacon and on the Liturgical Arts Committee and even published a book on liturgical decorations. She loved to paint watercolors and quilt and was a member of a quilting club for a time. Helen is survived by her children Janis (and Phil Castrogiovanni) from Penfield, NY; Lisa (and Jack Lynch) from Ypsilanti, MI; Dan (and Beth Campbell) Neff from Moline, IL; Doug (and Kris VanLent) Neff from Mt. Juliet, TN; her sister Clarice Brining, her brother Don Hammond, and her brother Dean (and Wilma) Hammond. She also has nine grandchildren: John Lynch, Eric Lynch, Laura Lynch, Robert Lynch, Patrick Lynch, David Neff, Katherine (Neff) Gibson, Tracy (VanLent) Contreras, and Eric VanLent as well as fifteen great grandchildren.

While at www.amsfuneralhomes.com please take time to sign Helen's guestbook and/or share a memory with her family.

To order memorial trees or send flowers to the family in memory of Helen Louise Neff, please visit our flower store.