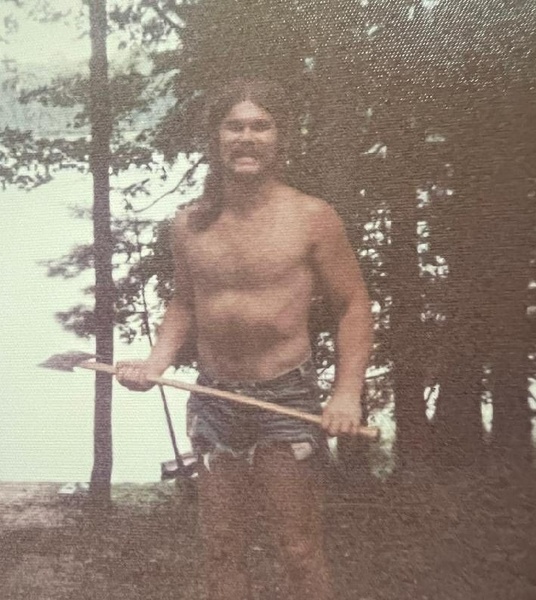 The Man, the myth, the legend. Keith went by many names' son, brother, Dad, Pops, Poppacido, Grandpa, and friend. He was born in Kalamazoo, Michigan on March 15, 1950, to Gabriel and Jeannine Longjohn. He was the eldest of seven children including David (Cynthia), Mark, Brian (Sharon), Bruce, Susan, and Mary (Jeff). Growing up Keith was a Boy Scout and enjoyed playing baseball. He grew up on West Lake in Portage and had many adventures there with his brothers, sisters, neighborhood friends, and the family burros. He spent most summers of his youth crammed in the family station wagon heading out west with the entire Longjohn crew and Grandma Sly in tow!

Keith was someone who loved to laugh and always had a smile to share. He loved spending time with friends and often got involved in hilarious shenanigans. Those friends know who they are!

Keith’s second marriage, to Sharon, produced a son named Devin in 1989. Devin’s birth came one year after Keith became a grandpa to Christopher Jr. Devin was born an uncle, something the family always joked about. Christopher “Biggie” was born in 2008 making Keith a Great Grandpa, something he was immensely proud of. His granddaughters Kezia, Alyza, and Asa followed. Keith loved nothing more than spending time with and spoiling his grandkids. They were very much his pride and joy. He could often be found scouring the clearance aisle of Walmart or ordering gifts on Amazon. He was extremely generous and thoughtful. Always excited to shower gifts on the kids.

In recent years Keith traveled to Florida with daughter Sonya, best friend Chris, and their family. He spent time on the beach near the ocean, eating, drinking, and laughing. He enjoyed those travels very much.

Keith spent countless hours watching Tigers baseball with his son Devin. They had a standing date every Friday night for years. Dinner and baseball. This was time Keith treasured, spent talking baseball with his son. He not only loved the Tigers but was also a lifelong Lions fan. He watched the Lions play on Sundays with his dad and brothers at their childhood home on West Lake. You always knew when the Lions were playing because of the boisterous shouts coming from the Longjohn living room.

Keith had many career changes during his working years. He was always a hard worker and had an amazing work ethic. He gave his all no matter what the job was. He retired from A.M. Todd after many years. He made many dear friends during his time there. He loved meeting up frequently with the other A.M. Todd retirees for lunches in the park or chatting with them on the phone.

Throughout his life Keith was an avid music lover. He played guitar and bass in various bands and jammed with many friends over the years. Music was truly his happy place. He attended many concerts with friends and with his children. He adored live music, playing records, and more recently watching music videos on YouTube.

Keith will be remembered by those that loved him as a loving, generous, kind soul. He had a sharp wit and a wonderful sense of humor (sometimes a sick sense of humor but we all loved it). He loved his family more than anything. His parents, siblings, nieces and nephews, and especially his children and grandchildren. Family always came first.

He fought a long and hard fight. He fought until his last breath. Always the protector, he stayed strong for all of us. He will be missed beyond words.

Keith was preceded in death by his father Gabriel, his brothers Mark and Brian, and his nephew Jordan Jackson.

We will be having a celebration of life at a later date, details are TBD.

While at www.amsfuneralhomes.com please take time to sign Keith's guestbook and/or share a memory with his family.

To order memorial trees or send flowers to the family in memory of Keith Longjohn, please visit our flower store.