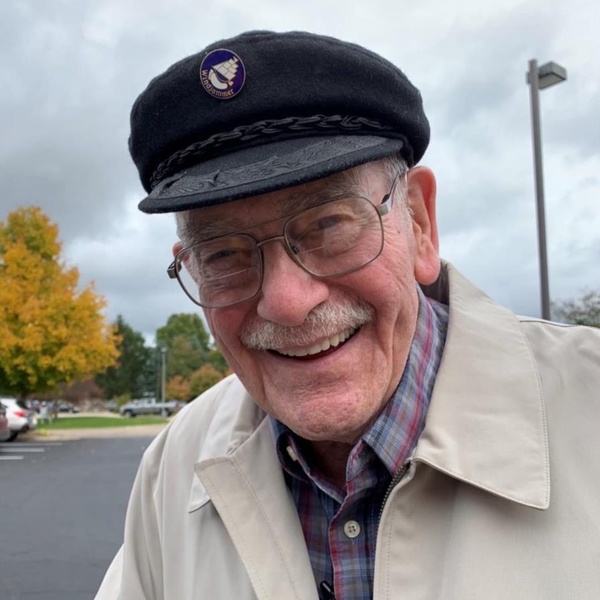 Roy “Rex” Olton, Professor Emeritus of Political Science, peacefully passed away on November 6, 2021. He was preceded in death by his dear wife of 68 years, Priscilla June (Smith) Olton and his brother Bertrand Olton. Roy is survived by two children, Bertrand Lee Olton (Pixie Lamphier) and his children Tamara Ruth Olton, Timothy Roy Olton, Christina Renee Olton. Leslie Olton Babel (James) and their children Ross William Babel and Richard Olton Babel (Emily) and their children Bailey and Mia. Professor Olton was born August 4, 1922 in Richmond Hill, New York, the son of Bertrand Fitzroy and Miriam Grace Knies. He received his B.A. from Ohio Wesleyan University and his M.A. and PH.D from the Fletcher School of Law and Diplomacy. He taught for ten years at the Massachusetts Institute of Technology, before joining the Political Science Department at Western Michigan University in 1957. Professor Olton’s fields of specialization included International Politics, U.S. Foreign Policy, International Law and Organization. In 1986, he received the Teaching Excellence Award from the WMU Alumni Association. Dr. Olton also served on the Faculty Senate, on many boards, councils and committees. He was the Chairman of the Political Science Department for over ten years. Dr. Olton also co-authored several books related to his field of expertise. Over the years Roy was also a member of the First Congregational Church of Kalamazoo. Professor Olton was an Infantry Veteran of WWII. He held commissioned and non-commissioned ranks in the 90th Mountain Infantry, and the 306th Infantry; 77th Division in the Asiatic Pacific Theater. After hostilities with Japan ended, Olton was quartered on the Northern Island of Hokaido, during a winter of endless snow. To counter the boredom of the regiment’s single movie shown endlessly, he found about a dozen eager enlisted men and taught them to read. Then, like falling dominoes came roles in the creation of the Hakodate Task Force School, followed by a larger school at Sendai, on the main island of Honshu, and finally to a career in university education and what he preferred to call the “blessed life of an academic”. Both before and after retirement, with his wife and best friend Priscilla, Rex was able to enjoy a considerable amount of foreign travel. In retirement he did a lot of reading, hunting, fishing and the study of wildlife. Rex leaves behind a considerable number of friends he made while living at Friendship Village. Cremation has taken place. A memorial gathering will be held Saturday, December 18, 2021 at 2:00 p.m. in the Friendship Village Kiva. Due to Covid restrictions, masks are required to enter the building and be worn at the gathering. Memorial contributions may be sent to: WMU Foundation Emeriti Medallion Scholarship Fund; Friendship Village Woods Fund; or Loaves and Fishes of Kalamazoo. While visiting Roy's tribute page please take a moment to light a candle or share a memory with his family. The Olton family is being assisted by Avink Funeral Home and Cremation Society, 129 S. Grand Street, Schoolcraft, MI 49087 (269)679-5622.
To order memorial trees or send flowers to the family in memory of Roy "Rex" Olton, please visit our flower store.